I did some more reading on uses of Gephi, particularly this post on Facebook Network Analysis. I'm really just learning how to use this software and a very powerful feature for analysis is included that I didn't know about earlier: network analysis. Network analysis looks at a set of data and sorts the nodes into categories or sub-networks based on the connections between the nodes. In Gephi this is done with modularity plugin and the results can be very interesting. Not only are the results more visually appealing but the conclusions and directions for further research are more readily apparent.

Here is an updated network graph of the biblical references in the Augsburg Confession. 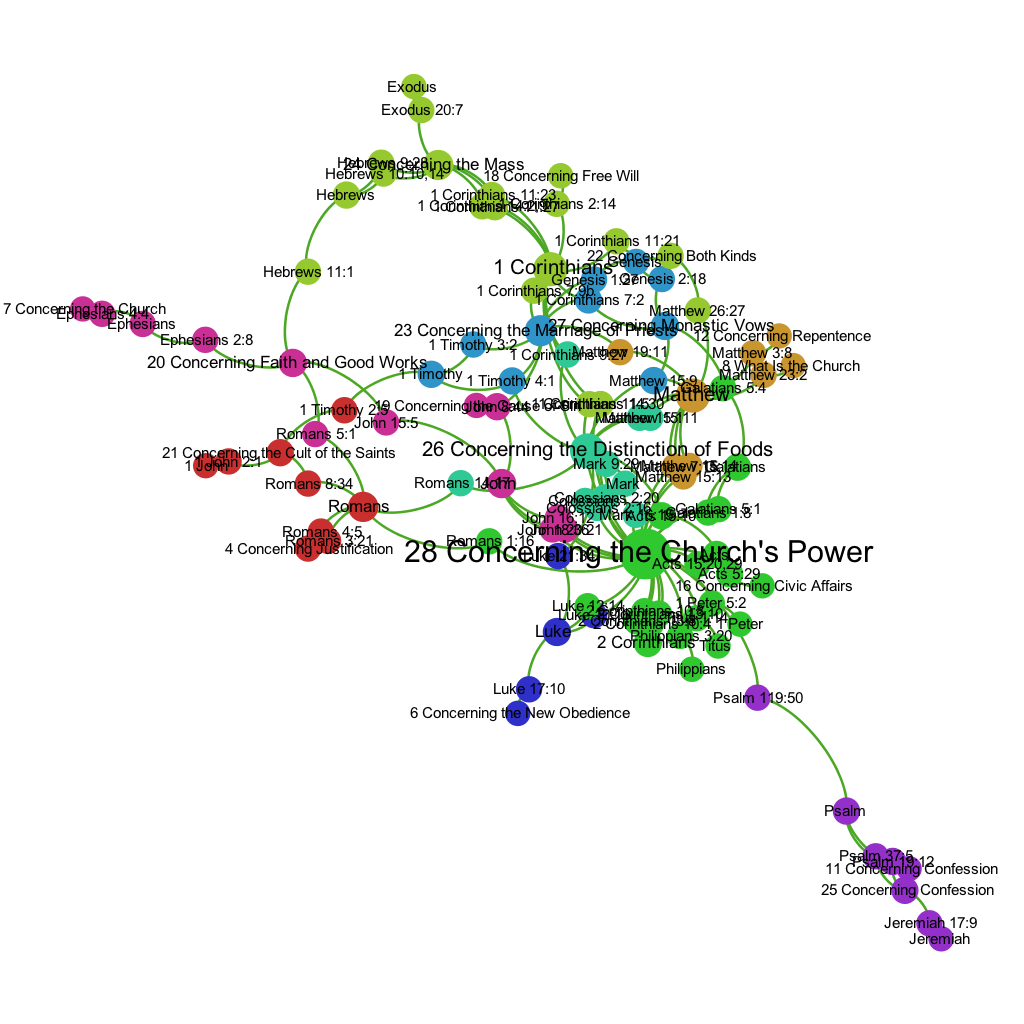 You can explore this graph interactively here.
When I prepared this graph I did a few things differently. The first major change is the layout chosen for the nodes. In my initial work I used a layout algorithm that tried to fit everything into a spherical pattern which looks nice but doesn't group things by how well they are related in particular. The new graph uses the "Force Atlas" algorithm. As you can see it groups the nodes by how closely they are related so visually browsing the data is much more effective. I also ran the modularity algorithm on the data which allows you to color code the nodes based on the categories that it finds. For this work I asked the software to find eight categories since that is the default.

The combination of the different layout and the color coding makes a few things immediately apparent.

There are two articles named Concerning Confession, one of them is doctrinal in nature and the other suggests reforms. It doesn't take network analysis to guess that these would be related. What is interesting from the graph, however is how far they are from the other articles. Of the verses referenced in these two articles, only Psalm 119:50 is referenced in another, Article 28 Concerning the Church's Power.

There are a few articles which are further removed from the others and stand alone; Concerning Justification, Concerning the New Obedience and Concerning the Church. The only one of these which is grouped with another article is Concerning the Church which has been placed with Concerning Faith and Good Works because they both reference Ephesians. This group also contains a third article, Concerning the Cause of Sin which also only references one verse from John. A more rigorous analysis of the texts of these three articles would show how closely these are related in language and content.

Two articles which do share similar viewpoints and are grouped together using this method are Concerning the Marriage of Priests and Concerning Monastic Vows. Despite the fact that these articles only reference one verse in common, 1 Corinthians 7:2, the modularity algorithm placed them in the same group and the layout algorithm has them near each other probably because of the relationships between these articles and others that they share more in common with in terms of references. It is interesting to see that they are placed together based on what the models know which is only biblical references and not based on actual content. The content of these articles is very similar however as they both deal with changes to monastic culture although one speaks particularly to the celibate lifestyle of priests and the other speaks to issues regarding the vows of monks.

As I learn more about the capabilities of the Gephi software it is becoming a much more useful and powerful tool for analysis. I plan to do some more research on this topic from both a technology and the theology point of view and will keep reporting what I find.