There has been a lot of talk about this year being bad for a lot of folks. We certainly lost a lot of celebrities this year like Prince, David Bowie, Carrie Fisher and many more. I was curious if 2016 was worse than other years for losing actors and actresses so I decided to make a visualization (of course). Most people don't know this, but the Internet Movie Database has downloadable text versions of their database available online. Here is what a section from the biographies file looks like:
NM: 'K', Murray the

BG: Murray the K was born Murray Kaufman in New York, New York, on 14
BG: February 1922. After an early career as a song-plugger, he moved into
BG: radio and in 1958 joined 1010 WINS. He remained there for seven years,
BG: becoming the most popular New York radio DJ. He was an early supporter
BG: of singer Bobby Darin, inspired and then 'broke' his hit single,
BG: 'Splish-Splash', and made a guest appearance on his "This is Your Life"
BG: TV tribute in late 1959.
BG:
BG: In 1964, he was one of the first Americans to interview The Beatles,
BG: firstly by phone, later joining them in their hotel suite. From then on
BG: he acted as their "Mr. Fix-it", arranging for them to visit all the
BG: best clubs and restaurants. He also championed their records and for a
BG: while, he dubbed himself "the fifth Beatle" and became a trusted friend
BG: of the group during their American tours, though not of manager Brian
BG: Epstein, who apparently resented his considerable influence.
BG:
BG: He left WINS in 1965 and later resurfaced as a presenter on WOR-FM - the
BG: first FM rock station.
BG:
BG: Married six times, he died of cancer on 21 February 1982, in Los
BG: Angeles, California.

I then used Excel to perform some data cleanup and create broad categories of causes of death. The method I used to do this was probably not the best, but it works. I nested six if statements that searched the Cause column for keywords with an output for the appropriate category.

The resulting file was suitable for use in Tableau Public to create a visualization which can be viewed online and I have pasted a screenshot below. Note that the online version is interactive, please check it out.

The graph shows that deaths in 2016 are actually down from 2015 by about 500. It is difficult to know how accurate the data from IMDB is, however, so I'm not sure if that will make anyone feel any better. 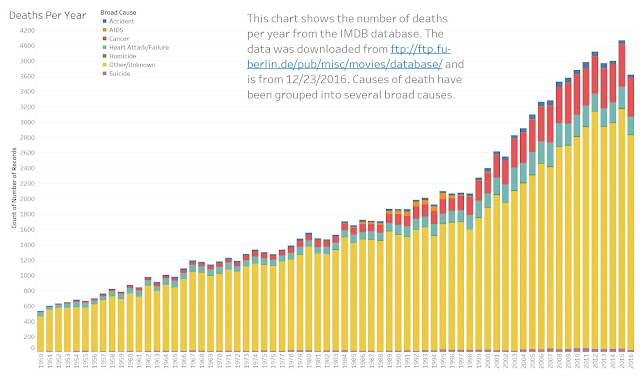