I promised folks that I would write something up about my mission trip to Haiti from November 30th through December 8th, 2012, so here we go...

We gathered at Allison United Methodist Church in Carlisle at about 2:00am on November 30th. Our trip leaders Rich and Mira had already put a lot of organization into this moment so we were quickly in our vehicles and on the way to Reagan International Airport. Despite a slight detour through downtown D.C. and Arlington we made it to the airport on time and the American Airlines staff got us checked in and ready to fly quickly. We didn't have any issues getting through security, which was a minor miracle, and before we knew it we were in the air bound for Miami and then on to Port au Prince.

The airport in Port au Prince has gone through some renovations and was in much better shape than when I was there in May/June of 2011. The immigration and customs process was smooth and getting our luggage together was much less of an issue. The airport was very crowded, however, so moving around with all of our luggage (we each had a carry-on bag plus two suitcases of donations) was difficult. When you exit the airport there are a lot of Haitians there to "help" you with your luggage. Walking into this unprepared would be a difficult experience but we had warned everyone about how things work. Fortunately we quickly found our contact from the Methodist Guest House and he was able to assist us with getting to the parking lot to load into the vehicles. 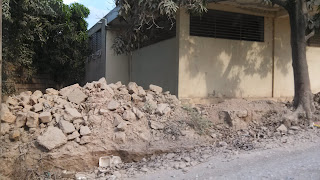 The trip through Port au Prince to Petionville did show some signs of progress. There were still some piles of rubble to be seen, but not as many as previously. There also weren't nearly as many piles of garbage littering the streets, although there was still a fair amount in some places. During the week we learned that the government has been paying for people to collect garbage and I did see at least one garbage truck while I was there and men were shoveling garbage into the back of it. There was also some construction going on in the city and later in the week we even saw heavy machinery being used to install sewers and make road improvements.

We spent the rest of Friday getting settled at the Guest House and took a tour of the campus there. The Guest House is part of a large complex in Petionville that houses a school, church and the offices of the Methodist Church of Haiti. In many ways it is like a little oasis amongst the chaos that seems to define much of the country. The Guest House even has a pool which was a welcome treat Friday night. 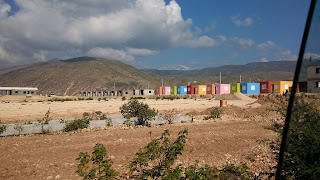 Saturday was another traveling day. We drove from the Guest House to Cariesse Ferry Terminal.  The trip gave more opportunities to see progress in the country, including a large complex of houses being built outside of the city. Many were painted in bright colors which are evident in other areas of the country, although here in what is now the middle of nowhere made them seem out of place. I was wondering what kind of lives the people that move into these houses will have waiting for them. There wasn't any evident industry in the area that I could see, but perhaps that will come with the houses once they are complete and people begin moving into them. Haiti does have a good (if confusing) system of transportation provided by the private tap taps, and I'm sure they will begin servicing these neighborhoods once there are people in them. The tangled traffic in Port au Prince already has people accustomed to long commutes, so perhaps moving miles outside of the city won't prove a barrier. I'm also guessing that people would rather live here than in a tent city, as they are now. 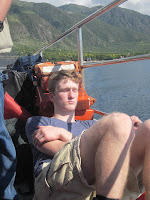 We took the ferry to Anse-a-Galets on the island of La Gonave. The ferry was supposed to leave at 12:00pm but instead left around 1:30pm for the two hour trip. It was a bright sunny day, however, so there were plenty of opportunities for naps and working on tans. The port we landed in was small and we experienced a similar desire from workers trying to help us with our baggage there. We were met by some drivers from the church and loaded into two vehicles and went to the church where we would be working and staying for the next week.

The island did not experience any damage from the earthquake and we were there working on a church that they have been working on for about nine years. The compound we stayed in housed the church and a school where a little over two hundred students between kindergarten and twelfth grade are taught. The building will be two stories tall and the walls and second floor were complete. Our task for the week was to remove the old cement floor and install a new one. All of this would be done by hand, of course.

On Sunday we attended their worship service which was a joyful experience. The sermon was titled "The Price You Pay" and it was interesting to hear the pastor speak about sacrifice and giving in a community that does not appear to have much to give. It was an excellent stewardship sermon and I think it highlighted something that exists in Haitian communities that we don't see much of in the States. It showed that no matter how bad things may be and how poor they might be, they are still a tight knit community that will look out for one another and protect each other when they can and need help. The service included a lot of singing and lasted about two and a half hours, which is on the short side for them. We spent the rest of Sunday getting to know the community a little by taking a walk around the town. La Gonave has about 60,000 residents and close to half of them live in Anse-a-Galets, so the town is more urban than I was expecting. On our walk we stopped at one of the locations where they weigh fish that are caught and provide the major industry for part of the community.

The area had some beautiful sites although similar to what I experienced on my last trip they were tainted by the amounts of poverty that are also there.

One of the places we visited was a school started by a woman from California called Great Good Haiti. They provide education for students that have difficulty in other schools and work with them to pass their sixth grade exams. Throughout the trip I learned more about the Haitian school system than I knew before and it was interesting to learn that some of their standards are higher than what we have in the States. For instance, all students in school are required to learn French (the official language), Spanish and English. Our interpreter was a little taken aback to learn that in the States every student isn't required to learn a foreign language to any proficiency (they have to take an exam in each language). Before graduating each student has to take fourteen exams to show their proficiency in many subjects including the sciences. 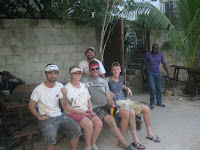 Monday morning came bright and early and our day began with breakfast at 7:00am. By 8:00am we were on the worksite and work we did. We worked along side about twenty Haitian men throughout the week and formed relationships with them that added to the meaningfulness of the trip. Most of Monday was spent breaking apart the old cement floor which looked like it was either very old or had been put into place as a temporary measure. The floor was broken apart with pickaxes and shovels and then removed by buckets or picked up if there were large pieces. The rubble was placed in a pile which we would be dismayed to learn the next day had to be moved again, this time into the street. It would have been more efficient to move it directly into the street, but that's how things tend to work in Haiti.

On Tuesday we started putting the base coat of rocks into the church and then the Haitians laid out rebar on the floor. Once the rebar was all in place we started pouring concrete one bucket at a time. We formed a bucket brigade and started passing buckets down the line. We did this most of Tuesday afternoon and all of Wednesday, but by Wednesday afternoon the church had a nice level floor that would be ready for whatever kind of finished flooring the church would choose (either tiling or smooth cement). Also on Tuesday or Wednesday we visited an orphanage in the town. The woman who started it has no formal supporters and just gets along however she can to provide a home for the children that don't otherwise have a place to live.

Since our work was completed on Wednesday we spent Thursday morning sorting the donations we brought for the school and distributing them to the schools. Most of the team had the opportunity to go back to the Greater Good Haiti school and swim at their beach, which included a barrier reef suitable for snorkeling. This was a nice treat for the end of the work week and we felt it was well deserved after the long workdays we spent there. 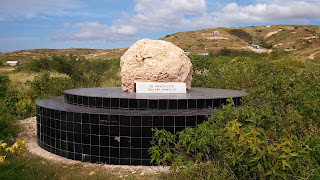 On Friday we woke early for a 5:15am breakfast so that we could get to the ferry by the 6:30am departure. Unlike the trip to La Gonave, the ferry to the big island left promptly. Once we reached port we had to wait for our ride back to Petionville but we didn't mind the downtime by this point in the week. It also gave us the opportunity to see some of the commerce that takes place at the port, including the many goats that where brought from the island being herded through the port. On the trip back to the Guest House we stopped at the memorial site where over 200,000 people were buried in a mass grave after the earthquake. It was a humble site with a fittingly humble memorial. At the time I was struck with the how small it was but it now seems fitting, especially since the resources that we would normally put into a large memorial have much better uses in a place like Haiti.

After a brief break at the Guest House we had lunch at what amounts to a fast food place and then visited another orphanage in Port au Prince. The conditions there weren't excellent but are better than what some of the children could have had if they were left in the streets. Many had sad stories of how they were in the orphanage, most of them related to parents suffering from alcoholism or drug abuse or simply not having the resources to take care of a child. The director of the orphanage said that some children are returned to their parents once they have a place for them to live in a safe environment, but I got the impression that most of them stayed there until they were old enough to move out and live someplace on their own.

Saturday was our travel day back to the States and it was a long day getting from Petionville back to Carlisle, PA. We were all tired by the end of the trip, but it was definitely a worthwhile experience that none of us are soon to forget. 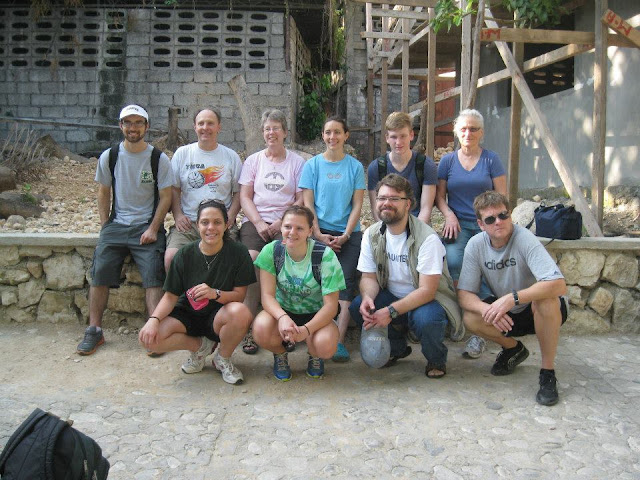 More pictures from the trip are available on the group's Shutterfly page. As of this writing only two of us have uploaded photos, but more should be available soon.